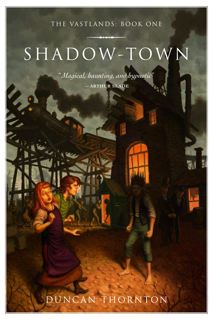 Though it takes a while for the plot to get moving due to a complex world being set up (Involving nightmarish creatures such as Whisperers, Clatterfolk, Thralls, etc.) the world of the Vastlands is immediately vivid, original, and disturbingly reminiscent of the familiarity of our nightmares. Thornton brings a dark world to life in this book in which farmers are haunted by a plague of the Whisperers’ Words – powerful incantations which they whisper through the air to takes over the farmers’ bodies, turning them into sleepwalking undead Thralls who labour endlessly for the Whisperers. The two main characters, cousins Rose and Jack get caught up in the horrors of the Tanglewood, and eventually Shadow Town, as they journey from their grandmother’s farm.The story itself is an engaging, twisted fairy tale. One of the characters is even named Tamlin, reminiscent of the ballad of the same name. Shadow Town’s plot even loosely follows that of the ballad – though I won’t say how as that would reveal the plot.Though the characters and plot are well-developed, what really makes this book resonate with a haunting quality of its own is the world of the Vastlands themselves. Rose is a painter and sees the twisted landscape around her as potential material for paintings – the desert and Tanglewood become brushstrokes. Similarly, Thornton weaves the landscapes of the Vastlands into being with words (every word choice and metaphor echoes the bleak tone of the novel), creating a vivid and elaborate setting which is just as haunting as the Whisperers’ Words.

I recommend this book to anyone who enjoys fairy tales or dark children’s novels such as Neil Gaiman’s The Graveyard Book. This is a story much darker and weightier than the all too common vampire or zombie novel.

Though the setting is vast enough to support a series, my biggest qualm with the book is that it felt like a contained novel more than the first entry in a series. I’m curious to see what new characters and locales of the Vastlands are revealed in book two of the series.