Being a recent transplant to Winnipeg and a lover of mythology, Thunder Road has been on my radar for quite a while, but I only recently got around to reading it. Everything I had heard about this novel, from the Norse Mythology to the badass protagonist with nothing to lose, felt familiar to me when I first learned about this book. It reminded me of American Gods. This is not a bad thing because I love American Gods and the juxtaposition of mythology with the contemporary world. So instead of thinking, “Oh look there’s a Canadian rip-off of American Gods which could probably be called Canadian Gods,” I thought, “Great, more awesomeness for me to read!”

Even the covers are similar!

The cover art kind of bothered me because it only makes the novel look more similar instead of standing out as a unique work of its own. It would have been nice to see a cover with the blazing oil sands, a giant amidst the flames, or even some Manitoba landmark.

Thunder Road tells the story of Ted, who was “touched by the Nine Worlds” when he was exposed to the fire giant Surtur during an explosion while working the oil sands in Alberta. After the giant wreaks havoc on the patch and changes Ted’s life forever, he moves to Winnipeg for a fresh start. But once he is exposed to the Nine Worlds of legend, Ted is pulled into the world of Norse Mythology. He is tied down by strangers in a hotel room and branded with markings that give him the power of the gods. I won’t say what happens with the tattoos, because learning about them and what they are capable of is one of the coolest parts of the book and I don’t want to ruin it. Let’s just say he ends up on a 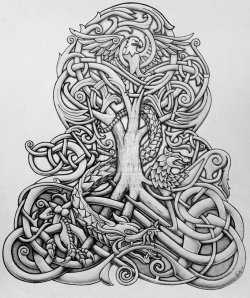 world-saving road trip across Manitoba with Loki and a fortune-telling love interest along for the ride.

While there are a lot of similarities between Thunder Road and American Gods, they are two very different novels and the themes they share are ones I could read about a million times and still want more, just as we desire some connection to the old world, to the gods of the past and their place in the present. And Thunder Road does succeed in making that journey a very Canadian one, with a wealth of Canadian landmarks and even mentions of Tim Hortons!

I would recommend this book to anyone who likes urbran fantasy or has any kind of interest in mythology. I’m curious to see where this trilogy goes, so I’ll definitely be reading the second book, Tombstone Blues, some time this summer.

Chadwick Ginther is the author of Thunder Road (Ravenstone Books), a fantasy in which the larger-than-life personalities and onsters of Norse mythology lurk hidden in Manitoba. A sequel, Tombstone Blues, is set for Fall 2013. His short stories have found a home in On Spec, Tesseracts and the Fungi anthology from Innsmouth Free Press; his reviews and interviews have appeared in Quill and Quire, The Winnipeg Review and Prairie Books NOW.