In a lot of ways, No Man’s Sky is the game I’ve always wanted. When I played the Mass Effect trilogy—one of my all-time favourite game series—I spent hours scanning planets in the star map, reading about their geology and weather, and imagining the infinite possibilities beyond our world. In No Man’s Sky, I hoped for a game that would allow me to not just scan and read about these infinite worlds, but to visit them. I think a lot of people had the same expectations for the game, and those high expectations, combined with the realistic constraints of an indie studio with a grand vision, disappointed a lot of people on launch. 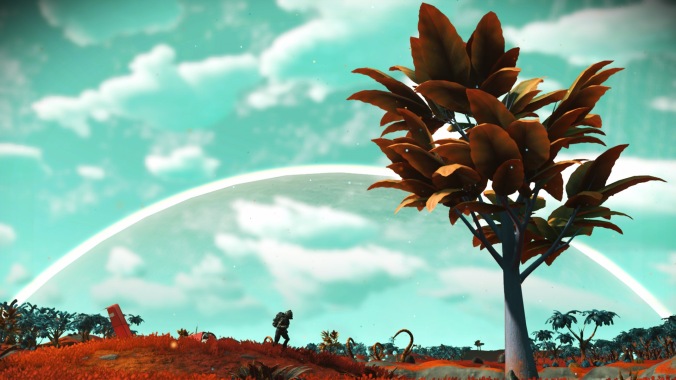 The game has been on my radar since well before its launch, so I was excited to finally pick it up when it finally launched for Xbox One this summer, after some big updates. Disclaimer: I never played the launch version, so my review will cover the game as it plays with the NEXT update.

There is a lot to talk about with this game. It’s huge. So let’s start there. One of the things the game gets right is its scale. When I opened up the galaxy map for the first time I felt completely lost in an endless sea of stars. I still feel that way after sinking dozens of hours into the game. Each system is unique, and there is a great sense of the vastness of the universe and your uncertain place in it. Within the star systems there is a seamless transition between space flight, entering a planet’s atmosphere, and walking around on that planet. 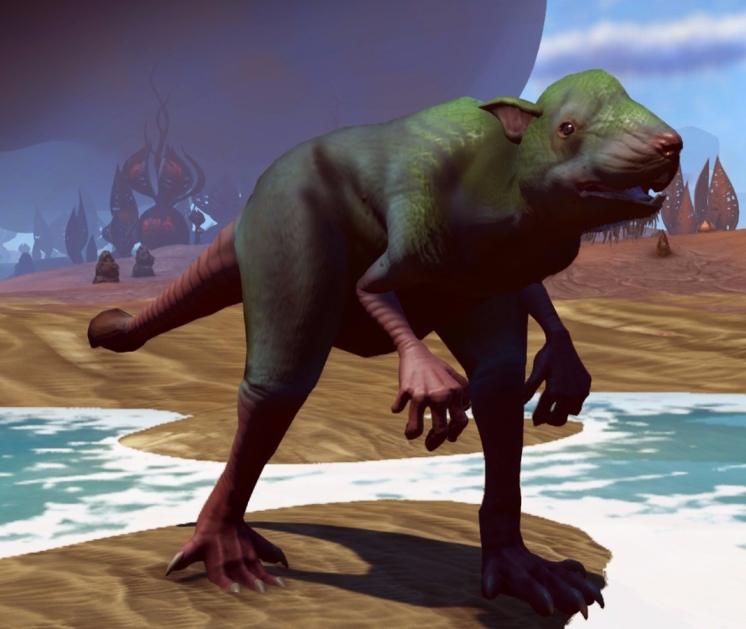 And the planets themselves are vast—and beautiful. (I spent hours using the photo mode to pretend I was a space photographer. All the images here are from my experience.) Each planet is unique, a feat which is amazing when you consider the overwhelming amount of star systems and planets in the game. Some are covered in sweeping oceans or dense jungles, others are full of rocky mountains. Some of the worlds are populated by large herds of lifeforms, others are barren. And the evolution on each planet is unique and cohesive. On some all the plant life is fungal, with tiny mushrooms growing around rocks, and giant tree-sized ones stretching toward a ringed planet that hangs in the sky. On others all the animals have evolved to have tentacles, from small rabbit-sized creatures to giant dinosaur-sized ones. Some have flocks of giant flying centipedes that soar the skies. One of my favourite discoveries was a t-rex rat!

The minerals are diverse too. Thay can take the form rocks, pillars, or odd formations of crystals. The sheer variety is overwhelming at first, but once I learned what types of flora and minerals yielded certain resources, it wasn’t hard to find what I needed.

The game is set in a beautiful, though often brutal universe, enhanced by a soundscape that has a great synthesized classic sci-fi feel, furthering the sensation of being alone in a strange universe of infinite possibilities. Despite the rich atmosphere and my love of exploration, I don’t like to wander aimlessly, so I soon began following a main quest line, the Artemis path. This quest line guided me through things I never would have figured out on my own, like crafting a base, exploring space stations, and taking on various side missions. 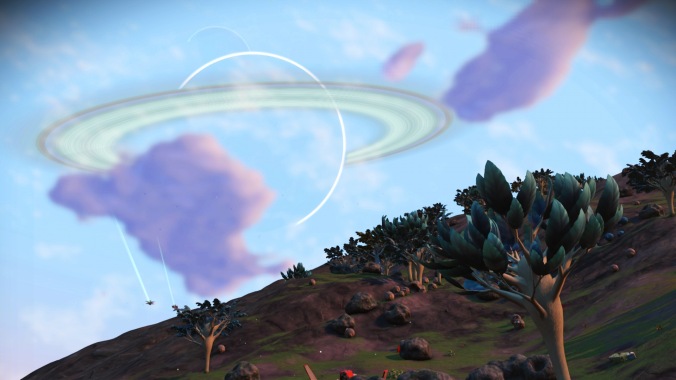 The story itself is fascinating, and is full of the existential questions. The kind that enter your mind when you’re lost in a strange universe, humbled by the constant reminder that you are a tiny part of existence, trying to find your purpose—if you even have one. The downside to the story, however, is that it almost feels like a text adventure. You travel great distances to meet aliens, and then just scroll through text boxes. I think I enjoyed the game more than I would have at launch because I need that focus of a main quest, but though it presents stimulating ideas, it ultimately feels underwhelming (though I appreciate the fact it led me through the universe). Keep in mind I’m only talking about one of the main quests. If I try another I’ll update this review if it changes my mind.

No Man’s Sky made me think a lot about what a game is and what it can be. It reminded me of my experiences with the Grand Theft Auto franchise. I’m fascinated by each new entry in the series and the huge worlds they create, complete with TV channels and radio stations, unique brands, characters, districts, technology, and a lot more. They bring a whole city to life, creating what feels like a truly infinite open world.

I’ve always used video games as a healthy—I hope—outlet for my obsessive compulsiveness, completing every quest, unlocking every achievement. I’ve lost countless hours of sleep creating spreadsheets to track achievements and researching how to defeat bosses on extreme difficulty levels, all in an effort to do every last thing, just because it would drive me crazy if I didn’t.

But as open world games have become the trend, and games get too big to complete 100%, I’ve found myself learning to be content with carving my own unique path through the game, and learning to live with leaving quests undone and items uncollected, because there is just too much. I think this has helped me learn to let things go, as game worlds more and more closely mirror real life. We have to choose our paths, we have to prioritize what is important or fun in our own lives. And with No Man’s Sky, for the first time, I feel like this isn’t a choice. The game is so huge there will never be any way to explore it all. And that, in a way, is liberating. I don’t have to complete everything in the game, or visit every planet. I can be content with my own journey, wherever it takes me. 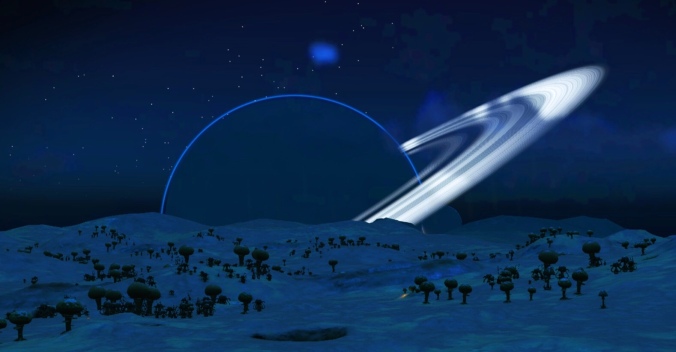 So those were all things the game did well, but it also drove me crazy on many occasions. The way you mine resources is similar to Minecraft, you’re tearing apart your environment to build new things out of the building blocks, but it is extremely tedious. During one of my most frustrating experiences, I was searching for oxygen, and using up my life support in the search. So any oxygen I found had to go to breathing. Then sentinel drones who enforce order on each planet (and kill you if you don’t run) started chasing me, so I ran back to my ship. But the ship was out of launch fuel, so I couldn’t escape. I had to then search for the components of the launch fuel while I was being hunted by the drone, then craft that to escape from the drone and begin my futile search for oxygen all over again.

Another peeve was that my inventory filled up extremely quickly, so I avoided collecting a lot of things I otherwise would have. I’m sure I could have expanded my inventory and been more efficient about collecting resources, but it all felt very tedious to me, so I didn’t want to spend any more time learning about these cumbersome, complicated systems than I had to. I love collectibles in games, but I generally find crafting to be boring, so that one’s all on me. And to the game’s credit, I still enjoyed it and found a lot to love despite not being a big fan of one of its core mechanics.

Overall, even after numerous updates, the game felt a bit buggy, and I was never sure if my more difficult moments were due to bugs or not, which led to wandering around aimlessly and resetting quests when markers disappeared. 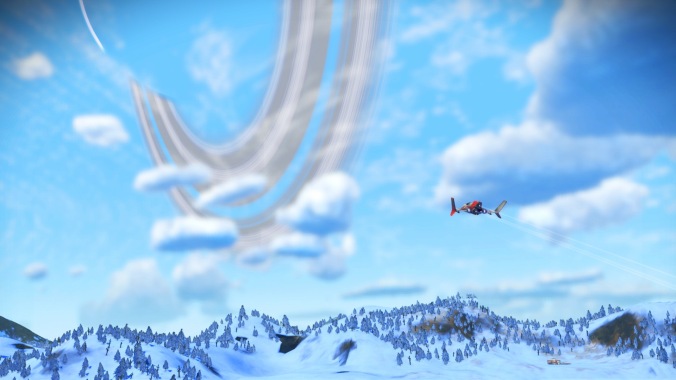 Though I struggled at times, my experience with No Man’s Sky wasn’t really about gameplay. Like I said, the exploration was my dream, and it scratched that itch, even if it meant doing it in a slower, more grinding, realistic way than I would have chosen. No Man’s Sky is an experience you can’t have anywhere else, and that’s what motivates you to keep exploring. The best moments are landing on new planets full of unique vistas, colorful plants, wide oceans, and chasing the weird lifeforms around to scan them.

In a sense, No Man’s Sky is more simulation or experience than game. Though there is a narrative and main quest, it often feels tedious. If you like collecting, resource management, crafting, and exploration you will love this game. If not, you still may be drawn in by the vastness and wonder of it all like I was.