Oops! There isn’t an eraser big enough for this ball of fur

I’ve heard from a lot of people in response to my Erasure post which I wrote over a year ago about turning 30, erasing stuff, and how we’re not getting any younger so I was going to carpe all the diems, make mistakes, and learn Portuguese. One of the best responses was from one of my oldest friends, Abe, who sent me a giant eraser and some comics I drew of our group of friends in high school. Good times. Actually, the comic was aptly named: The High School Times. Anyway, Abe recently started a brilliant blog, which you can read here. And you really should because he’s a brilliant, insightful writer and all around awesome person.

So, a lot of things have happened since I wrote that Erasure post. I’m now headed toward 32, and not really worried about being 30 anymore, and the Portuguese thing got complicated. It’s actually a pretty funny story.

Last fall I went to Montreal. Hilarious story, right. Wait, here comes the funny part. I have never had a desire to learn French. While my mother and both of my sisters studied French in school, I studied Spanish. When my friends traveled to Paris in college, I studied Japanese. When I finally went to Europe, I avoided the continent all together and stopped in Ireland.

So anyway, there I was in Montreal with my Portuguese textbook, ready to use my spare time on vacation to complete the last few exercises.

Then things got French. Fast. People in Montreal that I talked to were all bilingual, but I quickly felt myself falling for the charms of the language and the culture. I’ve always dreamed of spending time in a place that would challenge me to speak another language, yet I’ve been feeling a pull back east as I get older too, and feeling like there is limited time to travel to new place while still staying connecting to all the places I’ve been. Quebec is lovely and hilly and mountainous, there are huge deciduous trees and all those wonderful things I miss about the east coast. Being in that place sparked memories of my past and reminded me of the future I’m chasing.

So when I got back to Winnipeg, I put Novo Avenida on the shelf and enrolled in a French class. Wait, I’m not a quitter. I have justifications:

1) I got to take French for free through a government funded French for Immigrants program. It feels like I’m learning a lot faster than I was learning Portuguese through studying on my own.

2) I live in Canada. French is by far the most useful second language for me to know. It’s useful at work (when visiting Montreal) or just whenevs I feel like Frenching. That’s what they call it, right? 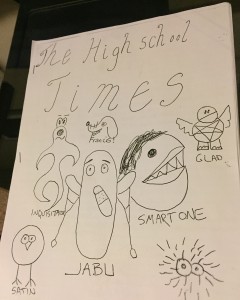 3) I am no longer erasing. I read a book about mindsets recently, and how we can grow from mistakes. It made me see opportunity where I used to see failure. Maybe you don’t always have to erase, but can constantly improve. Such as reshaping a letter written in ink, turning a mistake into something new, not worse. So anyway, the justification is: French and Portuguese are both romance languages. Learning one will help me learn the other, and I have the ability to take French classes for free, so why not start there and build Portuguese on top of the skills I pick up along the way? It might not be the most efficient way, but how can you ever complete an objective if you’re erasing and starting over? Especially if you happen to be really indecisive and always want to try something new…

Oh, wait, I forgot the really funny part. As in ironic funny. There is a chance I’ll be going to Brazil in the coming months. And I just might bring a French book to study while I’m there. *upside-down-smiley-face-what-a-crazy-world emoticon*

One thought on “Erasure II: Reshaping the Path”